Susannah Tubb Tabor, daughter of George and Mary Tubb, was born near Kings’ Mountain, North Carolina.  The Tubb Family was of English descent as were most of the settlers of the Carolinas.  In 1780 the Tubb family was living near Kings’ Mountain when that famous battle was fought there.

The following story was taken from family records.  A story that has been told in the Tubb and Tabor families for many generations.  The story has to be true since all the Tubb families have had a daughter named Susannah in honor of his heroine.

Susannah was eighteen years of when this famous battle was fought near her home.  She could hear the gunfire.  After the firing ceased she rode out to the battlefield to search among the wounded and dead for her father’s body.  She put it on her horse and secured it with leather thongs.  Starting homeward, she heard groans in the bushes near the path.  She stopped to investigate and found a young American Lieutenant unconscious with a gash in his head.  His brain could be seen pulsating in the blood.  She untied her father’s body and placed the man on the horse and rushed him to her home.  She, her mother and sisters dressed the wound and stopped the bleeding.  She then remounted her horse and returned to the battlefield for the body of her father.  Only then did she re-examine the wound of the soldier and found a portion of his skull missing, but the skin was all there.  She sewed the skin to close the wound and watched over him until he recovered.  Susannah and her family nursed him back to health again, but only the flesh and skin covered his brain.  He returned to the army and soon afterwards her family moved to Rutherford County, North Carolina.  Susannah married her Lieutenant and they were wed 62 years, raising 4 boys and 6 girls.  She lived to see many grandchildren and some great-grandchildren.  She saw a few small Colonies grow into a vast independent nation, dense forests into farms and cities.  Susannah Tubb Tabor died January 31, 1852 and is buried by her husband near Louisville, Mississippi.

Some wrote that Susannah had moved into the Uriah Berry home just before she died there.  Her daughter, Melinda, married Uriah Berry whereas Nancy married Simon Berry. 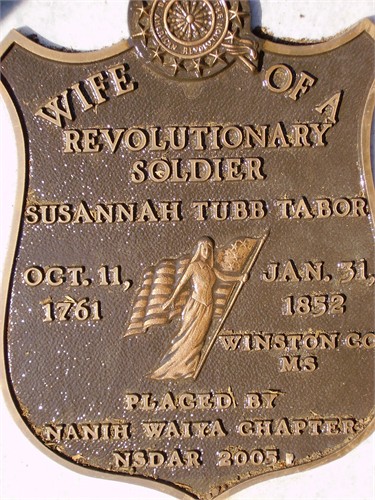