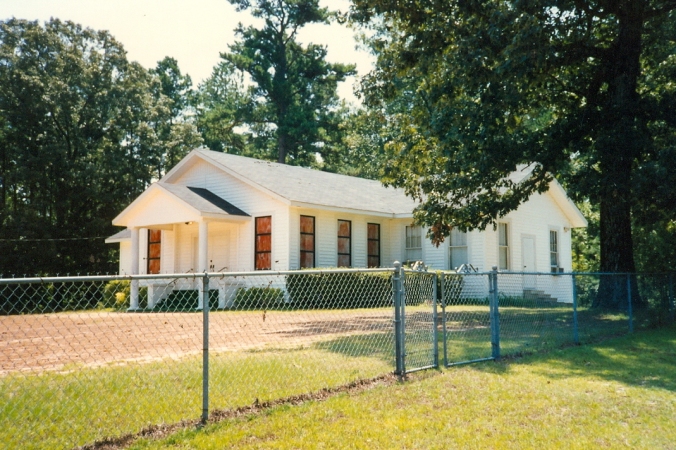 The land for the church site was donated by Mr. R. J. Tabor. In 1920 Mr. Tabor discovered that the title to the land was still in his name instead of the School Board and drew up a deed and gave it to Jeff Elliott, Floyd Burns, and Jeff Lovelady, deacons of the Church at the time. Mr. Floyd Burns took the deed to the Parish Courthouse in Farmerville and had it recorded.

The first Church building was built by Mr. Daniel Johnson, Mr. Heard and Mr. Jarmon. It was a 28 by 38 foot building and housed one large room. The lumber for this building was hauled by wagon and team from about 15 miles away.

In 1910 the first deacons that are of record were Daniel Johnson and Louis Hodges.

The first building was used for a church and a school building also. The newspaper article that we have referred to states that both Baptist and Methodist attended Church at Mt. Tabor. Mr. Jim Shaw recounts that this was his home Church and that he was born near here. He stated that there was never a Methodist Minister at this Church, however, there were some Methodists who were accepted as members of the Church. A Baptist preacher came to Mt. Tabor who did not believe in this dual reception of church membership and the practice stopped. This building was used as a church and school for about 28 years and since that time this building and a new building was only used for a church.

In 1890 R. J. Tabor, one of the founders of the Church and a great strength in it, moved back to Shiloh. It was through his efforts that the Sunday School Department was started and has been perpetuated through the years.

In 1932, the original building, which had stood for 58 years, was torn down and the lumber from the building was sold to R. J. “Bob” Shaw for $25. He used this lumber to build his home which was still standing as of December 29, 1976, when the notes were penned by Mrs. Thelma Burns Pearson. The grounds were cleared and the present main structure was built in 1932. It was a 32′ x 48′ building that had an auditorium, two small Sunday School rooms and a front porch. The Mabry Brothers of Ruston, Louisiana were the contractors.

In 1947 two Sunday School rooms were added. The timber was donated, cut and made into lumber by Floyd Burns, Jim Shaw and Leon Shaw and the building was built by Jess Futch. All Labor was donated and approximately $400 was the cost of the other building materials such as siding, flooring, roof sheathing, shingles, windows and doors. The deacons at the time were Floyd Burns, Jim Shaw, Jess Futch, R. J. Moore, and Wess Smith. The pastor was W. T. Walker of Choudrant, Louisiana.

In 1967 new pews, pulpit and communion table was built by Brother Albert J. Cranford, a local home builder at the time and also an ordained Minister. The pews cost $1,000.00 and the pulpit and the communion table cost $104.00. Brother Gary Nolan was the pastor at the time. He came here in 1958 and served until July 1975, 17 years.

In 1968 Brother J. D. and Billy Bennett donated the labor to put down new floors and build a new stage and the materials purchased cost $365.30.

On May 16, 1969, carpet was installed in the auditorium by Frank Johnson of Farmerville, Louisiana, which cost $264.

In 1974 the Church was painted and a new roof was put on.

In 1976 a kitchen, 2 restrooms, and 2 Sunday School rooms were added. The contractor was Tucker & Son, Farmerville, Louisiana, and the price was $8,464.88 and the floor covering was $492.00. Boyce Pearson donated labor and fixtures for the project and Billy Floyd Pearson donated labor for installation of the heating unit. Wiring labor was donated by Carl Futch. Brother Lynn Canterberry was pastor at this time. Also, in 1976 a new water well was drilled which cost $764.

On October 7, 1977, while Brother Lynn Canterberry was pastor, James Oxford and J. D. Bennett were ordained as deacons.

Other improvements that have been made are new pew cushions, vinyl siding, a new front porch, stained glass windows for the auditorium with the ones behind the pulpit being donated by Boyce and Ann Pearson and Boyce’s mother Mrs. Thelma Burns Pearson. The new door knobs for the front door and the road signs were donated by Kenny and Ann Roth and Theresa Hodges. The sign outside the building was donated by Kenny and Ann Roth, Ronnie Bearden, Daryl and Janis Donalson.

In the fall of 1993, three new road signs were installed, one at each entrance off Highway 2 and one after you turn off the east entrance. An additional sign welcoming State Park Visitors was added in March 1994, all being donated by Russell and Marie Adams.

As of this date, August 6, 1995, Mt. Tabor Baptist Church has a building fund of approximately $37,000.00 and this fund is growing all the time. There is a move to try to acquire the land between the old road and the present new road, clear it in order to be able to see the Church from the highway and to be sure no one else acquires this land and builds anything on it. Because of the condition of the present structure, we hope to soon start planning a new building complete with ample rooms for Sunday School, a larger fellowship hall, a baptistery, and new restrooms.

At this time we are in the progress of obtaining a plat of the Mt. Tabor Baptist Church cemetery and locate the plots that have been used as of this time. Mrs. Thelma Pearson is in charge of the cemetery and attends to the upkeep. Funds are from donations from the members and friends and families that have loved ones buried here.

On September 16, 1993, Mt. Tabor Baptist Church had its first Gospel Jubilee, and since that date has held one each third Thursday night of the month. Truett West has chaired this project and has been assisted by Ann Pearson, Song Leader, Marie Adams, Pianist, and Billy Smith Jr., organist, and the ladies of the Church that have furnished the refreshments and worked during intermission. We have an average attendance of approximately 60 people and some 12 to 15 Churches represented each time. We have 5 invited to perform each time and have a total of some 67 different people to come and lead in the praising of the Lord in music and song. This has been one of the best advertising tools for Mt. Tabor and we trust it will extend the work of the Church here in the community.

I have a computer in my home and have entered the history, the financial information and a data bank relative to the members of Mt. Tabor Baptist Church. The history is updated each year and financial reports are prepared each month and presented at the business meeting and the data bank in an ongoing project. Information included in this data bank is last name, first name, middle name, maiden name, address, date received, how received, date moved, where moved to and the date of the death on any named. There is lots of information missing in this data bank and if you have anything or any information you would like recorded in these records, please contact me. I also have this computer to publish the bulletin each week and this one is the 72nd one published including the ones for the Revivals and Gospel Jubilees.

I’m sure that each of you here today have many fond memories of your attendance to the Worship Services here where the True and Living God is Worshipped and memories of the Good Times that have been had here. Mt. Tabor is blessed with good cooks and there is a sweet fellowship in this Church that is enjoyed by all who attend.
I encourage you to write anything that might be added to this information that has been presented here today. I trust that you have enjoyed this history of Mt. Tabor and I thank you.

Notation: This notation is recorded to insure the safe keeping of this record of service Bro. W. C. “Billy” Smith as pastor of Mt. Tabor. He was elected pastor on May 28, 1980 and retired on February 115, 1998. His retirement program and reception was held on February 14, 1998.