When the Arkansas Southern extended its rail line from Junction City, Arkansas into Union Parish in 1899, it afforded sawmills in the area new markets for their lumber. The rail line also provided a more affordable method of transporting logs from the woods to the mill. Heretofore it was done with Lindsey wagons pulled by oxen. With the coming of the railroad, trams could be built and the logs loaded on flatcars and transported to the mill.

The Summit Lumber Company based in Arkansas established a saw mill about three miles below the Arkansas line next to the railroad tracks shortly after Arkansas Southern extended tracks from Junction City through Lillie to Bernice. The first timber deed recorded in Union Parish was dated June 11, 1895. Mr. J. B. McCormick sold Summit his timber located in Section 7, T23N, R1W. In 1920, Marshall P. Merritt was general manager of Summit’s mill at Randolph, while Mr. H. W. Huttig was president. Soon, a town sprang up around the mill and was named Randolph. Before long, the town sported a United State Post Office which served folks for miles around.

Arkansas Southern was contracted to haul the logs from the woods to the mill. For the next few years trams were laid over most of western Union Parish and timber harvested. Over 600 timber deeds were recorded in the Union Parish Clerk of Court Office between February 2, 1902 and July 7, 1915. In January 1911 a tram was completed to Lockhart and plans were made to extend the line south as fast as possible to Pearson Plantation, which was located three miles north of Farmerville.

A timber deed had been signed by M. J. Pearson for himself and his wife Siddie E. Pearson and Summit’s agent, J. W. Elder on July 16, 1905, allowing Summit to harvest all merchantable pine timber of eight inches and above, all for the consideration of $2,750. The terms of the deed were for eight years.

By the fall of 1911 the logging camp on Pearson Plantation was established. The boxes of some box cars were placed along either side of the tram tracks for living quarters for the employees and their families – a single box for a couple, two connecting boxes for a family with children and three boxes connected in an L or U shape for employees of high status.

On May 21, 1912 Izzie and Boone Breazeal went to work for Summit at the logging camp on Pearson’s plantation. Izzie ran the commissary which furnished household goods to the families at the camp. Each employee had an account at the commissary and the amount owed was withheld from the employee’s paycheck. Boone was hired as the log scaler at the camp. It was his job to determine the size of the logs that were to be transported to the mill at Randolph. Boone had a double box living quarter since he had a wife, Edna, a young daughter, Larue, and one on the way. Others at the camp were Tom and Edna Smith, the Strattons from Junction City, the Garland Bryant family, and Marion and Sally Cummings. Dr. Perry Tatum was the camp doctor. Garland Bryant was the company cook; Marion Cummings was the engineer on the locomotive. 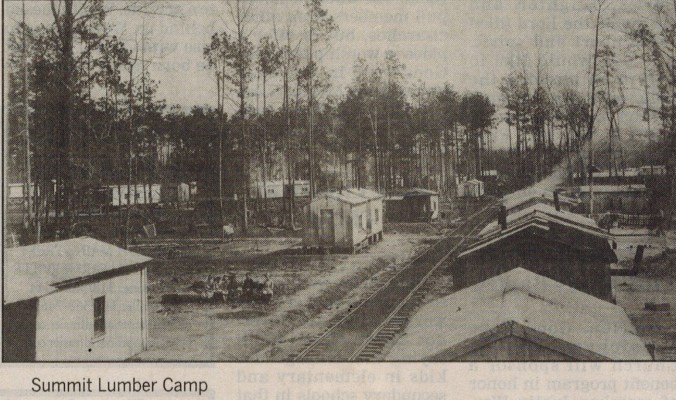 On December 19, 1912 Edna Breazeal went into labor and Dr. Tatum could not be found. In his stead, Dr. George A. Ramsey was summoned from Farmerville. A baby girl was delivered by Dr. Ramsey shortly after his arrival. After much doting over the newborn, Mrs. Cummings asked the proud parents if they had decided on a name for their daughter (It seems that naming newborns was not a priority in the Nicklas or Breazeal families. In fact, Edna had a sister who had died young who was never given a name. They just called her “Little Sister”). The Breazels told Mrs. Cummings that they hadn’t thought of a name, so Mrs. Cummings said, “Why don’t you name her Maurene?” Boone and Edna liked the name, so they named their daughter Maurene (Maurene turned 100 years old in December 2012. My two sisters and I call her “Mama”).

In early 1913, suits were filed by M. J. Pearson, D. F. Ferguson and John W. Thompson against Summit. On May 16, Appeals Court Judge Thompson affirmed the cases. On February 3, 1914 foreclosure proceedings were filed in United District Court in Shreveport and Summit Lumber Company went into the hands of receivers in April 1914.

After the demise of Summit Lumber Company, folks eventually moved away and Randolph soon became a virtual ghost town. Little remains today that indicates that in the early 1900’s there was a saw mill and bustling town called Randolph.