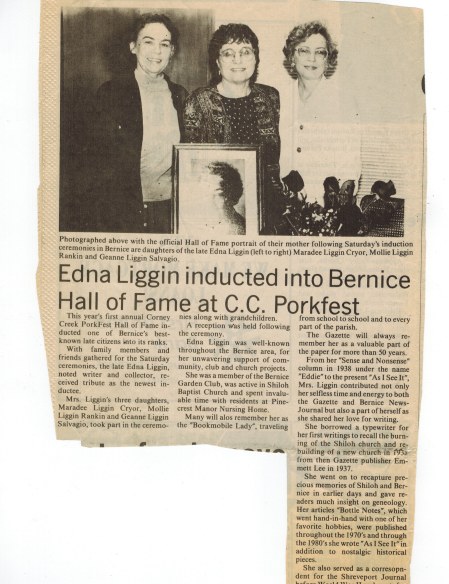 Photographed above with the official Hall of Fame portrait of their mother following Saturday’s induction ceremonies in Bernice are daughters of the late Edna Liggin (left to right) Maradee Liggin Cryor, Mollie (Molly) Liggin Rankin and Geanne (Jeanne) Liggin Salvagio.

With family members and friends gathered for the Saturday ceremonies, the late Edna Liggin, noted writer and collector, received tribute as the newest inductee.

A reception was held following the ceremony.

Edna Liggin was well-known throughout the Bernice area, for her unwavering support of community, club, and church projects.

She was a member of the Bernice Garden Club, was active in Shiloh Baptist Church and spent invaluable time with residents at Pinecrest Manor Nursing Home.

Many will also remember her as the “Bookmobile Lady”, traveling from school to school and to every part of the parish.

The Gazette will always remember her as a valuable part of the paper for more than 50 years.

From her “Sense and Nonsense” column in 1938 under the name “Eddie” to the present “As I See It”, Mrs. Liggin contributed not only her selfless time and energy to both the Gazette and Bernice News Journal but also a part of herself as she shared her love for writing.

She borrowed a typewriter for her first writings to recall the burning of the Shiloh church and rebuilding of a new church in 1938 from the Gazette publisher Emmett Lee in 1937.

She went on to recapture precious memories of Shiloh and Bernice in earlier days and gave readers much insight on genealogy. Her articles “Bottle Notes”, which went hand-in-hand with one of her favorite hobbies, were published throughout the 1970’s and through the 1980’s she wrote “As I See It” in addition to nostalgic historical pieces.

She also served as a correspondent for the Shreveport Journal before World War II and wrote for North Louisiana Historical Association and Baptist Association.