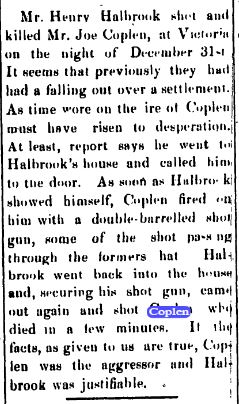 Mr. Henry Halbrook shot and killed Mr. Joe Coplen, at Victoria on the night of December 31st. It seemed that previously they had had a falling out over a settlement. As time wore on the ire of Coplen must have risen to desperation. At least, report says he went to Halbrook’s house and called him to the door. As soon as Halbrook showed himself, Coplen fired on him with a double-barreled shot gun, some of the shot passing through the formers hat. Halbrook went back into the house and, securing his shot gun, came out again and shot Coplen who died in a few minutes. If the facts , as given to us are true, Coplen was the aggressor and Halbrook was justifiable.

NOTE: As far as I know, Victoria is in Natchitoches Parish.  I am working on identifying Joe Coplen.