Miss Donie Laupheimer left this morning for a brief trip to New Orleans.

Mr. R. J. Rasbury has been confined to his bed for the past week with fever.

This week has ushered in first class gardening and farming weather. May such stay with us.

The parish convicts are now at work on the streets of Bernice, placing them in “apple pie order”.

Safe, swift, sure is the proper description of Cheatham’s Laxative Tablets. Cure colds in a day. Can be carried in vest pocket. Easy to take Guaranteed. Price 25 cents. Sold by R. Haas, Agt.

A petit jury for the March session of the district court was drawn last week. Names appear in another column.

You cannot afford to trifle with a cough. It may result in some serious if not fatal malady. Take time by the forelock and use Simmons’ Cough Syrup. Guaranteed. Price 25 and 50 cents. Sold by R. Haas, Agt.

Mrs. B. F. Pleasant returned home Monday afternoon from Ruston, where she spent a few days with relatives.

No equal on earth has Hunt’s Lightning Oil for Rheumatism and Neuralgia, as well as Sprains, Cuts, Burns, Bruises and Insect bites and stings. Guaranteed. Price 25 and 50 cents. Sold by R. Haas, Agt.

Mr. Duke Selig has sold his interest in the livery stable business at Ruston to Mr. R. M. Gill, and returned to Farmerville.

After an illness of several weeks, Col. D. Stein was able to be at his accustomed post a few days last week, but we are sorry to say that he is again confined to his room.

Card of Thanks. I take this method of thanking my many friends in the vicinities of Farmerville, Holmesville and Downsville for having presented me with a comfortable and convenient invalid’s chair.  MRS. LANIE E. ARCHER.

DENTAL NOTICE. Thurmon & Jordan will be at the following times and places, prepared to do all dentistry needed. All work guaranteed. Rates reduced. Loper’s, February 19 to 22nd. Oakland, Feb. 23rd to March 3rd. Farmerville for a few days, commencing March 4th.

My friend, are you suffering from any painful and annoying skin disease, such as ringworm, tetter, or anything similar? If so, just try one box of Hunt’s Cure. It never fails. Guaranteed. Price 50 cents. Sold by R. Haas, aft.

H. S. Foster, bookkeeper for the Monroe Lumber Co., was drowned Friday in the Saline river, near Warren, Ark. At last accounts his body had not been recovered, but a skiff and lantern that he was using had been found. It is feared that his death was the result of foul play.

A case of small pox is in Farmerville. Mr. Oliver Hollis, son of Police Juror D. W. Hollis, is the victim. It is supposed that he caught the disease in Shreveport, where he was a recent inmate of the hospital. The patient is isolated and every precaution is being taken to prevent the spread of the disease. Dr. J. G. Taylor is ministering to the wants of Mr. Hollis and says he is doing as well as could be expected.

The Best Prescription for Malaria Chills and Fever is a bottle of Grove’s Tasteless Chill Tonic. It is simply iron and quinine in a tasteless form. No cure, no pay. Price 50¢.

High water in the Hudson river and the formation of ice gorges stopped railroad traffic on the New York Central and Hudson River railroad Monday. Four large passenger trains were stalled in the flood, the waters rising so high that many of the cars were submerged to the roofs.

For all pulmonary troubles BALLARD’S HOREHOUND SYRUP, taken in the early stages, proves a certain and sure specific. It is equally effective in croup and whooping cough, and if used in season prevents the further development of consumption. Price 25 and 50 cents. R. Haas, Agt.

Mr. A. J. Hood, one of the conductors on the V. S. & P. railroad, shot and killed an unknown negro tramp last Wednesday at Gibsland. The negro was attempting to steal a ride on Mr. Hood’s train. The conductor ordered him to keep off without avail; and while the train was in motion, Mr. Hood fired at the negro for the purpose of frightening him away, and without the intention of hitting him. However, the ball struck the darky in the head, killing him instantly. Mr. Hood surrendered to the authorities and was released on bond.

Are you sick? If so, investigate the merits of HERBINE. It is a concentrated medicine, the dose is small, yet it quickly produces the most gratifying results, digestion improves, the lips and cheeks lose their pallor, the eye becomes bright and the step elastic. Price, 50 cents. R. Haas, Agt.

Two one-legged boy tramps were in Rayville Tuesday, one walked with a crutch, and the other one substituted a wooden peg for his missing member. Their ages were about 12 and 13 years respectively; one hailed from Osceola, Ark., and the other from Vicksburg, Miss. They carried an abundant supply of tobacco, cigarettes and cuss words, but appeared to be shy on morals and soap. Upon invitation of Marshal Crisler, the two wayward urchins boarded the east-bound train Tuesday evening and sped away for parts unknown. Here is argument for a State reform school. – Richland Beacon News.

We have just moved into our new store and have a nice, fresh, select stock of Men’s and Boys’ Ready-made Clothing. Hats and Shoes; also, a nice line of Groceries and Hardware; all of which we will sell at “live and let live” prices. Don’t fail to get our prices before buying J. W. STANCIL & BRO.

Last Friday afternoon sparks from a passing locomotive on the Arkansas Southern railroad set fire to cotton in the cotton yard at Bernice, resulting in 35 bales of the staple being seriously damaged. There were several hundred bales of cotton on the yard at the time and only by rapid and active work on the part of the citizens of the town was a very destructive blaze prevented. Loss is estimated at $200 to $300, which is covered by insurance. 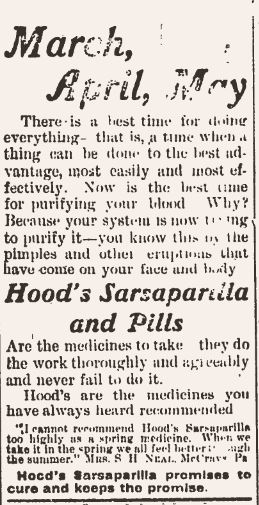 Couldn’t help getting a cold never cures it; but carrying home a bottle of BALLARD’S HORE HOUND SYRUP, and using it as directed, with cure the worst kind of cough or cold. Price, 25 and 50 cents. R. Haas, Agt.

The rivers and harbors bill provides for the building of two locks and dams on the Ouachita river, one near Monroe and one near Roland’s raft in Arkansas.

No one knows the unbearable torture one undergoes from piles unless they are so afflicted. TABLER’S BUCKEYE PILE OINTMENT is a quick, safe and painless cure. Price 50 cents in bottles, Tubes, 75 cents. R. HAAS, Agt.

Shreveport is hoping to get a donation from Andy Carnegie to establish a public library in that city. Correspondence to that end is now being carried on by some of Shreveport’s leading citizens.

A very disastrous freight wreck occurred Sunday on the Iron Mountain railroad, just south of Little Rock. The engineer was killed and the fireman badly injured. Damage to property was heavy.

Children often inherit feeble digestive power and colic of a more or less severe character results, when food is taken which is at all difficult to digest. WHITE”S CREAM VERMIFUGE acts as a general and permanent tonic. Price, 25 cents R. HAAS, Agt.

Card of Thanks. Pelican Lodge, No 17, Knights of Pythias, extend thanks to the ladies of Farmerville for assistance rendered in making our recent entertainment a success.  EDMUND HAAS, K. of R. and S.

Judging from expressions among the press of the state, the next gubernatorial contest in Louisiana will soon be on in full blast. Already several candidates have been mentioned for the place, among whom are N. C. Blanchard, Bob Broussard, Bob Snider, Jared Sanders, S. McLaurason, and others. Under the constitution, Governor Heard can not succeed himself. 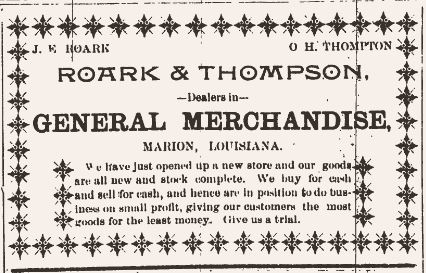