District court will convene in Farmerville next Monday.

If you want nice goods and want them cheap, go to W. J. Turnage’s and you can get them.

Rabbi I. Heingerg, of Monroe, is in Farmerville, in the interest of his religious work.

The Farmerville High School will close its present session on May 2nd – little over two weeks.

Quite a number of our citizens are contemplating visiting the Confederate reunion at Dallas next week.

Mrs. Edward Everett and child went to Monroe Sunday to spend a few days with relatives and friends.

We were glad to see Mr. H. Ludwig on our streets Monday, after several days confinement with illness.

Eld. E. O. Ware, one of the prominent Baptist ministers of North Louisiana, spent a few days recently in Farmerville.

Mrs. R. J. Rasbury and children and Miss Mattie Hardy went to Ruston to-day to take in the street fair.

FOUND.-On the streets of Farmerville a gold pin with green setting. Owner can get same at this office by proving property and paying for this ad.

All itching diseases are embarrassing as well as annoying. Hunt’s Cure will instantly relieve and permanently cure all forms of such diseases. Guaranteed. Price 50 cents. Sold by R. HAAS, Agent.

Ladies’ hats of the latest styles and fashions at W. J. Turnage’s. He also has a complete assortment of laces, embroideries and ribbons and a nice line of dress goods and silks.

Music hath charms to soothe the savage breast, but Simmons’ Cough Syrup soothes any breast; if same be afflicted with Colds, Coughs and like troubles. Guaranteed. Price 25 and 50 cents. Sold by R. HAAS, Agent.

For the past few days farmers have enjoyed fine weather for planting purposes, and judging from the few people who have come to town they have taken full advantage of it.

The last three days of this week might be called “teachers days” in Farmerville. Thursday and Friday will be given to teacher’s examinations, and Saturday to institute work.

Mules and Horses. I will be in Farmerville Wednesday, April 23, with a car of stock — a few good and balance in saddle and combination horses and mares. Wait and see my stock before buying.  J. D. BAUGHMAN

Rumor says the Cumberland Telephone Co. will put in a telephone line from Calhoun to Farmerville.

Capt. C. C. Henderson, general manager of the Arkansas Southern railroad, has given orders that hereafter work in the shops of that railroad must be abolished on Sunday.

White’s Cream Vermifuge not only effectually destroys worms, it also increases the appetite, aids assimilation and transforms a frail infant into on of robust health. Price 25 cents. Sold by R. HAAS, Agent.

The advertisement for sale of property of delinquent tax debtors of Union Parish appears on the fourth page of to-day’s paper. Read it and see if you are interested therein.

The national Editorial Association is now in session at Hot Springs, Ark.

The Best Prescription for Malaria Chills and Fever is a bottle of Grove’s Tasteless Chill Tonic. It is simply iron and quinine in a tasteless form. No cure, no pay. Price 50¢.

The finishing touch of the painter’s brush is being given the residence of Mr. W. J. Turnage. The large and commodious Baughman dwelling near town is nearing completion. Mrs. Barnes is remodeling and repairing her residence.

The appellate division of the supreme court of New York  has affirmed the conviction of Johann. Most of the charge of printing anarchistic articles in his newspaper about the time of President McKinley’s assassination. Most has been sentenced to a year’s imprisonment.

Monday Senator Foraker made a strong speech in the senate in opposition to the pending Chinese exclusion bill. He said that the measure was not only violative of our treaty relations with China, but that its enactment would materially hurt the cotton trade of the South. Mr. Foraker argued that Europe could take but little more cotton than she was now using, and that it behooved us to look to the far East as a new field for cotton goods. China afforded that field, provided we did not enact hostile legislation against her people. He added that with our possessions in the Philippines, we could easily control the eastern trade if we acted discreetly.

Don’t Become Discouraged.  But use Simmons’ Live Purifier (tin box). Many imitations of the original, so be careful and see that it’s “Purifier” and manufactured by the A. C . Simmons Jr., Medicine Co. Sold by R. HAAS, Agent.

Says the Bernice Journal: Material is being put on the ground for the erection of a new Baptist church which will be located on Louisiana avenue.

At best life is short. Do not make it shorter yet by rank neglect of that cough of yours when one bottle of Simmons’ Cough Syrup would cure you. Guaranteed. Price 25 and 50 cents. Sold by R. HAAS, Agent.

The many friends of Mrs. B. F. Pleasant will regret to learn that the physicians in New Orleans, whom she went to consult, deemed it unwise to attempt to operate on the cancer with which she is afflicted. They could do her no good and hence she will soon return home.

For Catarrh and Colds in the head, Hunt’s Lightning Oil inhaled is a sure cure. A few drops taken internally relieves Cramp Colic, Colic Cholera Morbus and such troubles. Guaranteed. Price 25 and 50 cents. Sold by R. HAAS, Agent. 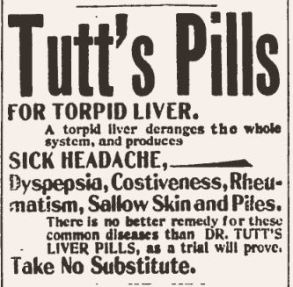 Pursuant to order of the commander, Camp No. 179, Confederate Veterans, met in Farmerville last Saturday, a quorum being present. R. M. Tatum and D. Stein were chosen as delegates to represent the camp at the Dallas reunion; and W. R. Roberts and D. W. Dawson as alternates. Bylaws for the camp were adopted. R. M. Tatum, M. B. Hayes, and Ransom Arrant were appointed a committee of three to fix time for the next reunion; and fourth Thursday in August, 1902, was agreed upon. Adjourned. S. W . Taylor, Chairman. D. Stein, Secretary. 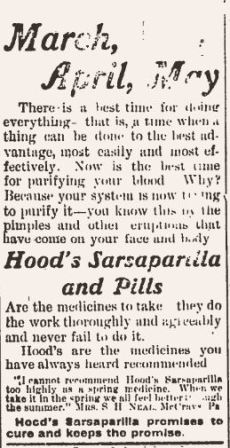 Ruston and Arcadia were infested this week with a gang of pick-pockets and thieves, who appear to have followed in the wake of the street fair folks that are now in this section of Louisiana. They would crowd around passengers as they got off from trains and attempt to rob them. They also persistently endeavored to steal rides on the cars; and Conductor Sanders came near having serious trouble with a gang of them; but his double barrel shot gun deterred the marauders.

The municipal authorities of Homer have decided to submit the matter as to whether an electric light plant should be installed in the town to a vote of the property holders. The result will probably be in favor of electric lights.

The construction of the new court house for Rapides Parish will be delayed, on account of all the bids for the work being rejected. The police jury considered the bids too high.

On account of Ruston Street Carnival and Jubilee, April 16th to 19th, the Arkansas Southern railroad will sell round trip tickets at prices quoted below. El Dorado $2.25; Junction City $1.55; Lillie $1.30; Bernice .95; Dubach .60. Tickets good for return the day after their issuance.

J. H. Murphy, secretary of the New Basin Canal and Shellroad Board, has disappeared from New Orleans. Investigation shows that he is short in his accounts to the tune of $3763.

Hardware jobbing interests of the United States have formed a trust with a capital stock of $120,000,000.

Most women with female weakness suffer dreadfully from piles in addition to their other pains. They may be cured by using Tabler’s Buckeye Pile Ointment. Prices, 50 cents in bottles, tubes, 75 cents. Sold by R. HAAS, Agt.

The bill granting a pension of $5000 per year to Mrs. McKinley has passed both branches of congress.

An ounce of prevention is worth a pound of cure, and a bottle of Ballard’s Horehound Syrup used in time is worth a staff of physicians with a drug store or two included. Price, 25 and 50 cents. Sold by R. Hass, Agent.

To Teachers. All school teachers in Union Parish are requested to attend the parish institute to be held in Farmerville on Saturday, April 19, 1902; and those within a radius of ten mile must attend. All are urged to be present.  J. O. HODNETT, Supt. 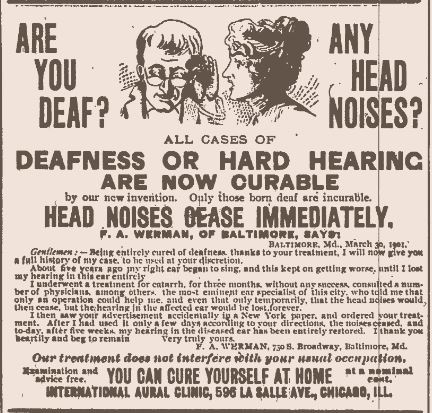