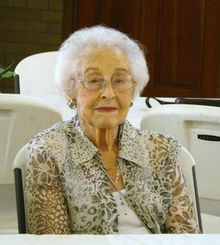 Pearl Adams Harris, 97, a retired bookkeeper and homemaker, passed away on February 4, 2016 at her home in Farmerville, La.

Visitation will be held at Farrar Funeral Home Chapel in Farmerville on Sunday, February 7, 2016 from 4:00 – 7:00 pm. Funeral services by Rev. Hank Hamilton and Rev. Johnny Hankins will be held on Monday, February 8, 2016 at Farmerville United Methodist Church at 10:00 am with burial to follow at Bernice City cemetery.

Pearl was a member of Farmerville United Methodist Church since 1954 and the United Methodist Women’s Organization since 1938. She loved to write stories, “Pearls of Wisdom”, that were published in the Bernice Banner. Other hobbies included sewing, crocheting, painting, and working crossword puzzles. She loved nature and all the beautiful things God gave the world to enjoy. Pearl was a devoted wife, mother and “Gran”.

The family would like to extend a special thank you to her loving caregivers LaSha Wallace, Joan Jones, Joyce Tucker and Laura Byers.