Eld. R. M. Boone, former editor of the ??? Chronicle, is visiting in Farmerville.

I have new good open buggies on hand for sale cheap or trade. J. D. BAUGHMAN.

Peaches ??? sell like hot cakes in Farmeville. They are exceedingly sparce this year.

I have for sale the Weber wagon–best wagon on the market.  J. D. BAUGHMAN.

Miss Mattie Honeycutt, of Itasca, Tex., is visiting relatives and friends in Farmerville and vicinity.

Mrs. B. A. Taylor has been quite sick the past week with ????, but we are glad to learn she is doing better.

Heaven Help Us in our trouble but use Hunt’s cure for Itch, Tetter, Ringworm, Itching Piles and eczema. Guaranteed. Sold by J. D. Baughman and B. T. Hopkins.

A bouncing boy baby was born Friday  evening to Mr. and Mrs. ?. G. Haberyan. Mother and child are both doing well.

Swapping lies is practiced, but don’t swap off Hunt’s Lightning Oil for a worthless article. Ask your druggist or merchant for a free sample bottle. Sold by J. D. Baughman and B. T. Hopkins.

Mrs. Benj. Taylor, wife of President Police Jury Taylor, had the misfortune last week to get a rib broken in a fall.

Mr. Edward Everett, the popular clerk of court of Union Parish, has been appointed to the position of Major on the Governor’s staff.

The dry weather and cool nights of the past week are having a damaging effect on corn and cotton. The latter plant shows appearance of rust.

We can’t tell a lie when we say there is no shaking of bottles, no licking of spoons, no wry faces when Cheatham’s Laxative Chill Tablets are used. 25 cts. No cure–no pay. Sold by J. D. Baughman and B. T. Hopkins.

Saturday an association was organized at Ruston for the systematic promotion of the truck growing industry. Mr. H. W. Ragan was chose president and Mr. T. W. Pipes secretary.

Mr. G. F. Martin, one of the civil engineers of the Farmerville & Southern railroad, went to Bernice Monday where he met his wife and two children, just from St. Louis, and brought them to Farmerville.

The series of meetings which began Sunday at the Baptist church in Farmerville are well attended. Eld. J. U. H. Wharton is doing the preaching in the main. He looks quite natural in the pulpit here, as he was pastor of the Farmerville Baptist church for a number of years.

A Tripple Hanging. Smith, Brown and Jones hag their hopes of hopes of recovery upon Cheatham’s Laxative Chill Tablets. They will be around soon shaking hands with friends. 25 cts. No cure – no pay. Sold by J. D. Baughman and B. T. Hopkins.

The growing values on timber lands in Union Parish were again demonstrated Saturday, when Treasurer Pleasant sold at public auction 440 acres of school land for $2460, approximately $5.60 per acre. And some of this land was very lightly timbered too, and the bulk of it practically worthless for farming purposes.

REPULSIVE FEATURES.  Blackheads, pimples, greasy faces and muddy complexions, which are so common among women, especially girls at a certain age, destroying beauty, disfiguring and making repulsive features which would otherwise appear attractive and refined, indicate that the liver is out of order. An occasional dose of Herbine will cleanse the bowels regulate the liver and so establish a clear, healthy complexion. 50c at R. Haas, Agent.

The Bernice Record says: Sam Roberts, son of Judge Roberts, met with a serious accident Sunday. While performing some duty in the engine room at the Bernice mill a chipping of steel flew into his left eye, it is feared, ruining the sight. He left on the afternoon train for Ruston for treatment. He was accompanied by Dr. John Talbert. [We have since learned it was necessary to remove the eye.]

The Perfect Liver Medicine.  Mrs. M. A. Jolley, Noble, O. T., writes: “I have used Herbine for a number of years, and can cheerfully recommend it as the most perfect liver medicine, and the greatest blood purifier. It is a medicine of positive merit, and fully accomplishes all that is claimed for it.” Malaria cannot find a lodgment in the system while the liver is in perfect order, for one of its functions is to prevent the absorption of fever producing poisons. Herbine is a most efficient liver regulator. 50c at R. Haas, Agent.

The Boss Worm Medicine.  H. P. Kumpe, druggist, Leighton Ala., writes: “One of my customers had a child, which was sick, and threw up all food, could retain nothing on its stomach. He bought one bottle of White’s Cream Vermifuge, and it brought up 119 worms from the child. It’s the boss worm medicine in the world.” White’s  Cream Vermifuge is also the childrens’ tonic. It improves their digestion and assimilation of food, strengthens their nervous system and restores them to the health, vigor and elasticity of spirits natural to childhood. 25c at R. Haas, Agent.

Mrs. James R. Fuller, an estimable lady of Shiloh, wife of Capt. J. R. Fuller, president of the Bank of Bernice, died last Wednesday evening after a protracted illness. Her remains were laid at rest in the Shiloh cemetery Thursday. Mrs. Fuller had been an invalid for several months with lung affection, and as her condition gradually grew worse, her family entertained by little hopes for her recovery. Still the death of this good woman was quite a shock to her wide circle of friends. She leaves an aged husband and several children to mourn her death; but they can be comforted with the blessed thought that this dear wife and devoted mother has only gone to her heavenly home.

The Monroe Sash and Door Factory — What it Does for Its Customers.

It gives them the cheapest and best yellow pine and cypress doors and sash and all other mill work. It gives them a good fit and promptly corrects any errors that may be made.

It delivers goods ordered promptly without any expense for dray age or freight in Monroe and its suburbs.

It readily modifies and alters bills, adds to or takes from to suit purchasers.

It gives reasonable time for payment.

It studies the interest of its customers and tries to please them.

It spends all its money with home people and helps to support the tin bucket brigade.

Send in your orders and “you’ll be satisfied with life.”

Two young men who live not a thousand miles from Farmerville, having been at outs for sometime, met last Friday and had a real genuine, all-wool-and-a-yard-wide gloveless contest. They fought like true pugilists of the 24-karat grit. After they had pounded each other with their fist until wearied down, they finished the job by kicking at each other in a way that would have done credit to a Texas mule. Such a brave and determined fight should have been concluded by the belligerents shaking hands and making friends. But we regret to say such was not done. Fighting of all kinds should be discouraged; but if men must do it, let them adopt this weaponless plan. It leaves a number of bruises, and possibly a few scars; but it leaves no widows or orphans, calls for no grave or felon’s cell.

A cowardly incendiary set fire to the two buildings, in Junction, occupied by Ed. Parnell as a wholesale grocery and feed store. Oil was freely used and when people got there, at 1 a. m., Friday they could not get near the burning buildings. It was also found that a small safe in building, in which Mr. Parnell had about $100 and some papers, had been broken into, but Mr. Parnell, who has been here since fire, thought this was for a blind. He also said he thought he knew enough to say that the fire was not a result of the so-called feud. The Junction Democrat, places loss to Mr. Parnell, and others who had goods stored in buildings, at $17,000, about half covered by insurance. He places Mr. Parnell’s loss at $8,500 — insurance $5,000. Citizens of Junction have offered $1000 reward for party who started fire and we sincerely hope he will be caught and punished. –El Dorado Tribune.

Stein has returned and says for the ladies to call and inspect his latest styles of dress goods at half price and other goods in proportion. No humbug. Beat men’s shirts, your choice at fifty cents. The sourest and best vinegar you ever tasted.  D. STEIN.

The assessment rolls of East Baton Rouge Parish, which were completed last Saturday, show a total property evaluation of $5,771,730, an increase over last year’s assessment of $144,576.

Dudley Edwards, son of Judge Ben P. Edwards, was shot at Bienville Saturday night by a negro named Dave Glass. The wound is not regarded as dangerous.

The settlement of the Manchurian question, thus opening up to the trade of the world several ports which have been closed, it is thought, will very materially benefit the American cotton industry.

President Roosevelt has directed the promotion of Major General S. B. M. Young to be lieutenant general and commander-in-chief of the United States army, upon the retirement of Gen. Miles within the next month.

Aunt Lucindy always carries Hunt’s Lightning Oil around with her, says it’s fine for swellings, tooth-ache, colic, weak back and back-ache, cuts, burns, neuralgia, catarrh. Aunt Lucindy has sixty-nine grandchildren and ought to know what she is talking about. Sold by J. D. Baughman and B. T. Hopkins.

The directors of the Farmerville State Bank held a meeting Saturday at which committees were appointed to get offers on suitable temporary quarters for the bank to open business in on September 1st; also to purchase a screw door burglar proof safe; also to get prices on lot for the erection of a brick bank building.

CURES SCIATICA. Rev. W. L. Riley, LLD., Cuba, New York, writes: “After fifteen days of excruciating pain from sciatic rheumatism, under various treatments, I was induced to try Ballard’s Snow Liniment, the first application giving my first relief, and the second entire relief. I can give it unqualified recommendation. 25c, 50c and $1.00 at R. Haas, Agent. 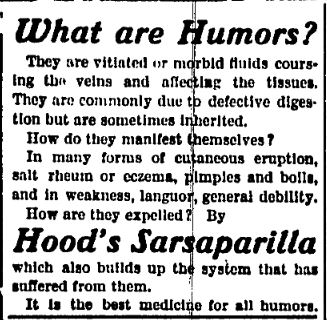 We learn that a few citizens of Farmerville have bargained with Mrs. J. M. Lee for her interest in the block of ground north of the public square in Farmerville. It includes seven lots, and the price agreed upon is $1500. The Farmerville State Bank is to get the lot in the north west corner of this square for $300. 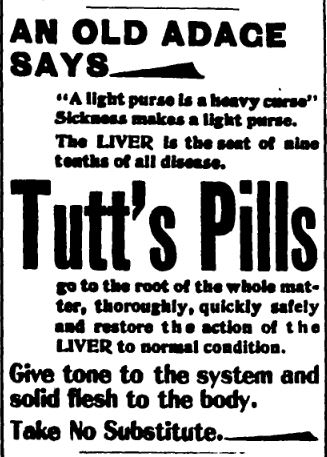 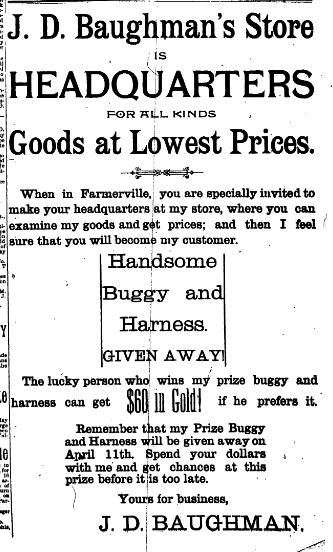