Early studies report that a man named Linville from North Carolina settled in the forests of what would become eastern Union Parish. He established the Linville Trading Post in 1778, thirteen miles northwest of the Ouachita City port. It was constructed on an old Indian trail, later named the Arkansas Road.

The earliest school of record in the Linville Trading Post area was Three Mile Springs Academy, near Ouachita City in 1841. A school was operated near the Trading Post prior to this time. C. C. Norman attended both schools. His father, C. L. Norman, a Justice of Peace, set up an office at Linville.

Roy Love and Charlie Abscent moved to the area in the early 1840’s from South Carolina. John Crow arrived in the area in 1848 from Georgia. He secured land north of the Trading Post and began a large farming operation. Active in Liberty Baptist Church, they were concerned about the education of their children.

During the Civil War Period (1861-1865), public education in the area ceased. Soon after the war ended, parents became concerned because their children were unable to read the Bible and write their names. In 1867, the community secured a vacant house near the Mary DeFee home, west of Linville, and organized a school. A second school was organized on the Linville-Marion Road near the Jess Green place. In 1875, a third school was organized near the Nelson Reppond place on the Marion-Sterlington Highway.

Mrs. Cole, a young lady from Alabama, taught the subscription school in 1880-1881. During the early 1881 period, three enterprising young men with children felt the need for a school in their area. They were Bill Kirkpatrick, Ike Reppond and Dick Pilgreen.

They constructed a one-room, log, pen-type building with no windows near the William Marshall McKinnie (my great grandfather) place, naming it Oak Grove. Benches were made from logs, and each student furnished his own slate board, marking pencils, speller, reader and arithmetic book. School patrons paid the teacher. This school building later became the Union Primitive Baptist Church and was in use until the 1950s.

In 1885, J. D. Crow, son of John Crow, was operating a small sawmill and store while caring for the family’s large farming operation. J. D. and William Marshall McKinnie (my great grandfather) joined the three men mentioned above to construct a small one-room school building, using his lumber. The school operated for five years and discontinued because there was not a good spring of water nearby. The school building was moved to a new site. 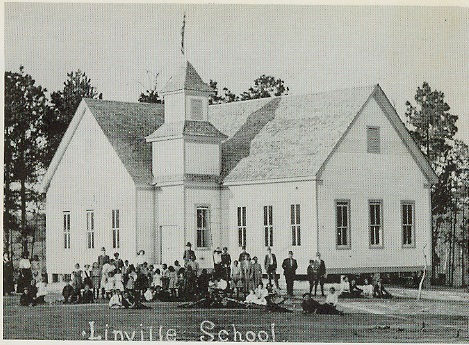 In 1901, the community constructed a two-room school at the present site and called the school Linville. E.L. Westbrook, Sr., R.L. Love and W.C. Beasley were carpenters. In 1902, F.M. Turner became postmaster and chairman of the trustees for the Linville school area. Four other men served on the committee: J. D. Crow, William Benjamin McKinnie (my grandfather), Mack Westbrook and Will Beasley. The five men continued to be educational leaders. 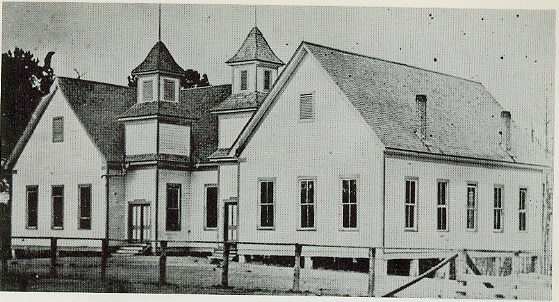 Chapell R. Reagan was the first principal-teacher at the new school. The community, following Reagan’s leadership, raised three hundred dollars and voted a ten-mill tax for school purposes. The community built another room on the school and opened with three teachers in 1910. During the next few years, Oak Grove and China Grove were drawn together at Linville School.

The school’s curriculum was expanded to include home economics for girls, shop classes for boys and health classes for all students. There were 94 students in 9 grades during that year. The school inventory included 33 double-seat desks, 44 single-seat desks, 6 common desks, and 130 feet of blackboard. In 1912, the school was recognized as a state-approved elementary school.

A basketball court was constructed at the school in 1915. The ground was leveled with hoes and shovels. The four by six backstops were attached to two pine poles, and the basketball hoop was attached to the backstop. Most basketball games were played during school hours. 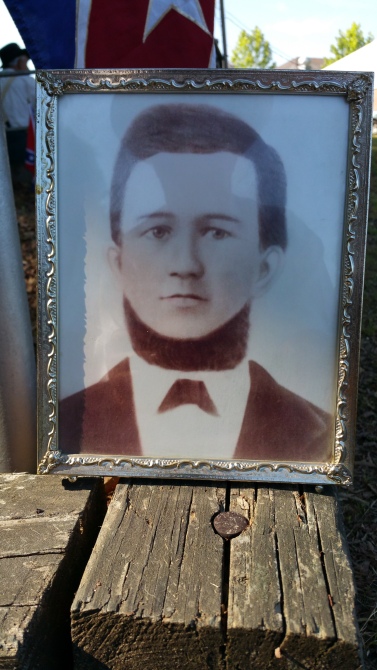 A baseball field was laid out in John D. Crow’s cow pasture, with part of the field covering a cemetery. Two graves of my 3rd great grandparents, Etienne Andrew Reppond and Lucresia Jane Jeter, were spared, and his tombstone still stands between what was the baseball grandstand and first base dugout.

The progress of Linville School slowed during World War I, as many men of the community were in service. In 1922, the state of Louisiana classified Linville as a junior high school. More construction provided extra classrooms.

The school applied for a state high school status and was approved by the State Department of Education in 1925. In 1927, a Home Economics cottage was constructed, and Miss Clotel Sutton of Ruston was employed as teacher.

In 1930, the school organized an alumni group to promote the school’s growth. A principal’s home was constructed, and a new Vocational Agriculture building was erected. S. D. Reech was employed as agriculture teacher. He accepted the job as County Agent of Union Parish in 1935. S. H. “Doc” Cooper became the second agriculture teacher.

In 1930, the community purchased an electric light plant for the school; many students saw electric lights for the first time. A hot lunch program was started in 1938. Also, in 1938, a gymnasium was constructed, and basketball games were played on the floor and with electric lights for night games. In 1948, the community cheered as the girls’ team won the state basketball championship with Mrs. Willard Taylor as coach. The following year, they came in second. The 1994 boys’ team won the state baseball championship.

Marion Hwy 143 was the main street of Linville and at one time, there were three stores, a post office and a garage. Gurvis Post’s store was located where Arkansas Road intersects with the Marion Hwy. Later Eldrice “Hatchet” and Gertie Mae Green operated that store. Elmer Antley’s combined store and post office was located where Love Road intersects the Marion Hwy. Part of the old Post Office may still be there.

There was also a store up the hill almost across from the school. Percy Turner built that store and ran it a while. Later Coach James B. Graves had the store. The last owners of this store were Eldrice “Hatchet” and Gertie Mae Green.

Over the years, more small community schools were consolidated into Linville. The students of the small two-room Springfield School in Dean was split between Linville and Marion schools in 1954, with the school serving as their boundary. Haile School was also consolidated in 1954. High school aged kids transferred from Spencer School to Linville in 1957. Eventually, Spencer School was closed, and all students were transferred to Linville.

Linville High School’s yearbook, The Stinger, was first published in 1950 and was dedicated to “Uncle Frank Love,” who had served as janitor and maintenance man at the school for 21 years. The ’58 Stinger annual honored its 50th anniversary with many photos from over the years.

During the 50s-80s, Linville continued to flourish. Many outstanding students became accomplished teachers and business people, receiving recognized for their accomplishments. Then the unthinkable happened. During the latter part of the 1990s, Linville School’s student count started to decline, and in 2005, it was abruptly consolidated with Marion High School.

Students, who have passed through Linville School’s doors (1867-2005), will always carry a piece of Linville in our hearts. In addition to the 3 R’s, its life-long teachers taught us values, honor, respect and integrity which have served us well throughout our lives. Many students went on to successful careers, but we will never forget Linville, where ordinary students learned to accomplish extraordinary things.

In more recent years, Linville School has been subjected to horrific vandalism, the soul of a proud school laid bare. This is a shame, because the old girl deserved better.

In 2015, Linville School was sold by Union Parish School Board, to Greg Lee, whose wife and mother-in-law attended Linville. We were hoping the new owners would give the vandalized buildings a proper burial. Unfortunately, as of this posting, the buildings continue to deteriorate.

Long live the 138 year history of Linville High School and our lifetime of memories and values!