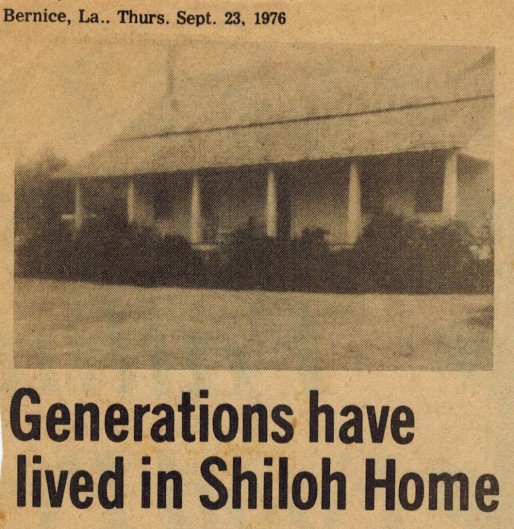 One of the oldest, and most certainly the best preserved of Shiloh’s homes of yesteryear is lived in today by Mrs. Chloe Moore and sons. It is at least 120 years of age, maybe more, and is situated a few miles north of Hwy. 2, between Shiloh and Cornie Creek.

Shades of “Billy-the-Wagon-Maker” Moore can be seen here as one looks at the old house, still standing square and unsettled, its every board painted; its age scarcely showing.

It is indeed a rarity in today’s building world, for how could a house be built today, every wide plank of heart pine? Skilled hands made this house; skilled hands tongue-and-grooved every plank; skilled hands planed each plank.

It is a little different today from the original. The separate ell that was the kitchen is gone, so is the portico, and high ceilings. Instead a front porch runs the length of the front of the house; the side hall is enclosed as a living room. The house now has three bedrooms and modern plumbing with a kitchen and dining room in a kitchen and dining room in a compact unit. This remodeling was done about seventeen years ago. The windows, however, are the same.

Although a cypress shingle roof was added to half the house about 35 years ago, with the owner, Howard Moore, assisted by Dale Goss and Simon Pearson, hand-hewing the shingles, the house still stands in its original rock foundation. The same shallow well supplies the cold water for use in the home.

The old home had two fireplaces, with a brick flue all the way to the ceiling in the old kitchen. Over the fireplaces, still there, were placed handmade mantles of solid walnut. Also , still in use in the house are a clothes-press and wardrobe, bed, made when the house was built.

“Who built this wonderful old house?” we asked Mrs. Moore. She told us she did not know, but she imagined her father-in-law, Thomas J. Moore had a hand in it. In my mind I though of the four sons of “Billy-the-Wagon-Maker Moore” who came from Alabama to Shiloh in the 1850″s. Surely some of the working-with -wood skills of this wagon-making Moore were inherited by his sons.”

When the house was remodeled, the little room that was originally the “grocer” room was incorporated into the dining area. Mrs. Moore told us that in her father-in-law’s time groceries or supplies were bought at intervals of six months, and stored in this little room. A sticky calamity happened once when her husband, Howard, then a three-year-old, pulled the plug from the molasses barrel. The little room was deep in molasses before anyone discovered it. Little Howard had been unable to re-plug the barrel. The result was a long time being cleaned up.

“How did Thomas J. Moore get his groceries?” we asked Miss Chloe. She told us from steam-boats coming up Cornie Creek to Shiloh Landing. This creek was also used by the family to ship their cotton to old Trenton. Miss Chloe remembers hearing them talk about the days when timber was also floated down Cornie, pinned together some way, she isn’t sure.

As the crow flies, the Moore farm is not too far from Cornie Creek. Cotton was raised through two generations on the farm, but today it is mostly timber with some truck farming or garden patches.

WHO WERE THE MOORES?

The Moores can trace their ancestry afar back, to one Robert Moore who lived in Scotland, and to one Rosanna McClelland who came to American from Antrim Co., Ireland over 200 years ago. She was with a group of A. R . Presbyterians under the leadership of Rev. John Renwick. They settled near Newberry, S. C .  It is believed the Moores came via Ireland as they emigrated from Scotland to America. A James Moore soon comes into the picture, and since then there have been many named James and Roseanna.

Almost 200 years ago (1799) a Moore was born who was later know as “Billy-th Wagon Maker” Moore in the Newberry District of South Carolina. When this William Moore was five years of age, in the same district was born a girl, named Sarah Tubb, who was to marry William in 1821 on August 12th. Immediately the newlyweds left for Perry County, Alabama.

Two of these brothers, George and Thomas, were to have closer relationships as they settled at Shiloh. George Moore came to Union Parish, married to the former Eliza Ann Reed, The Reed or Read family had emigrated to America from Ireland about the same time as the Moore family, and also went down from South Carolina to Perry County, Alabama with them. She died June 16, 1855 and was buried in the newly established cemetery at Shiloh, age 30.

Later, the brothers married sisters, daughters of Dr. John Clark, the first doctor at Shiloh. Dr. Clark, married to Martha Edmunds, who was a sister of James, John, and Roscoe Edmunds who had come to Shiloh in the 1850’s

It may have been that the Moore, Reed, and Clark families had previously known each other in South Carolina, for Dr. Clark was born in South Carolina, in the year 1811. An 1860 census of Shiloh showed Dr. Clark also as having five children, ten in all in his household, 50 slaves (second largest in Union Parish). His real property was $6,000; his personal $52,665.00. He owned 350 acres of improved land, 1250 of unimproved. his livestock was valued at $2365.00.

Later, his daughter, Adeline, married the widower, George Moore, while another daughter, Judith or Julie, married Thomas Jefferson Moore. To the latter couple Dr. Clark gave as her dowry, $10,000.00 Mrs. Moore told us, and $2,000 of it was used to build the house in which she lives. It was to be the home of Julie Clark Moore for the rest of her life.

So the house was built, in all probability  by the sons of “Billy-The-Wagon-Maker”. Since then it has been lived in by descendants of the Wagon-Make-Moore.

“Was Thomas J. Moore in the Civil War?’ we asked Mrs. Moore as we visited in the hall of this old home. She told us that he was. From our own sources we found listed only one Moore from Union Parish and this was Thomas J. He was a Private in Co. H. 31st, La. Infantry, enlisting June 18,, 1862. The next year he was reported sick in a Vicksburg Hospital, then paroled at Monroe June 12, 1865. One hot summer day, 111 years ago, a young man named Thomas Moore came back to his house and family at Shiloh.

It is believed his war years hastened him to an early death. Mrs. Moore told us her husband, Howard, next to the youngest child, was a small boy when his father died. He did not much remember him.

However, Thomas was living when his father-in-law, Dr. Clark, died in 1870. The next year, when the land of Dr. Clark was sold, Thomas J. bought some of the land north of the Farmerville-Vienna road. He also bought Dr. Clark’s books. Did this indicate that, suffering from ailments, Thomas Moore hoped perhaps to find a remedy in the medical books of Dr. Clark?

Thus it was that Julie Clark Moore was left a widow with young children. As she related later, servants combed her hair for her when she was a young girl, then she had to rear her children alone, on a farm, during the hard years after the war. They barely made it, and probably would not have if help had not come from George Moore, her husband’s brother. In time, the children grew up, and the burden was eased. She died in 1916 or 1917.

Mrs. Moore told us that her husbands mother Julia Clark Moore, had been dead about a year when she and Howard married, on April 28th, 1918. The ceremony was performed by a Rev. Canterberry in her home at Evergreen. When she came to the Moore House as a bride, two of her husband’s sisters, Neeley and Fannie, lived in the house, both unmarried.

“What about your family?’ we asked Miss Chloe. She told us she was the daughter of Jim and Ida Gilbert of Evergreen. She remembers her Grandfather Lewis Gilbert, and her Grandmother Mays, who came from around Holmesville. Both the Mays and Gilberts were early settlers in Union Parish.

From the day of their marriage until Howard Moore died April 25, 1955, they lived in the house. For the late Howard Moore it was living in the same house all his life, from birth to death. What the “home” must have meant to him, this grandson of “Billy-The-Wagon-Maker” Moore!

In this home they reared their seven children, six sons and one daughter. The sons were Clyde, Clayton, H. B., Roy, Haillard, Valerie, and Buddy. Today, Mrs. Moore lives in the house with two sons, Clayton and Buddy. She has 9 grandchildren and 2 great-grandchildren.

“My husband was a cattleman,” Miss Chloe told us. “He shipped cows, and some hogs, by rail from Bernice to St. Louis. He drove them to town, and then loaded them in boxcars. He bought and sold a lot of cows and hogs.” They raised cotton and feedstuffs too.

When we asked if the house had ever been damaged by storm or fire she told us that it had not. So it is today, in good preservation. Built by Moores, it has sheltered only Moores, and from it good shape can shelter many more for years to come. Its heritage sweeps from antebellum days, through three major wars, into the space age. The farm has provided a haven for a widow and small children in terrible re-constitution days to an age of fabulous inflation that pays an unheard of high price oil leases of this farm.

“Billy-the-Wagon-Maker” Moore must  have taught his sons to build for lasting endurance! The house is a testimony to a man who was born, lacking three years, 200 years ago. The Bi-Centennial touch can surly be applied to this house. 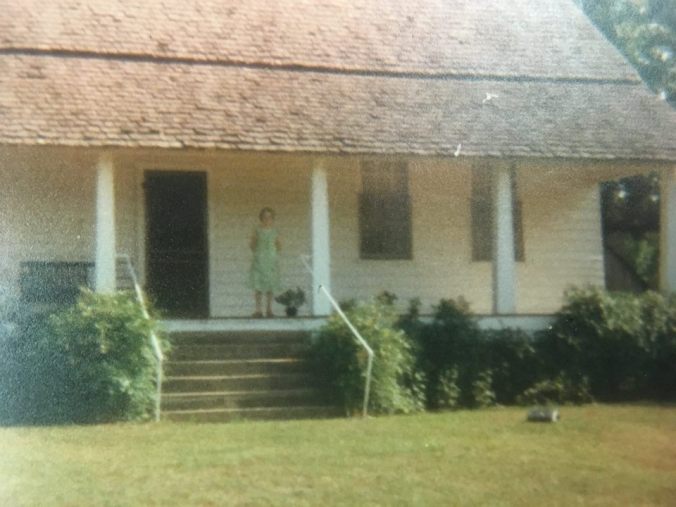