Nobody kicks when the bayou gets “full”.

Read ad of stray mule in another column.

Measles are quite prevalent south of the D’Arbonne.

Mrs. Ed Archer has been on the sick list this week.

Mr. Geo. W. Powell of Marion is spending a few days in town.

Miss Long, of Winnfield, is visiting the family of Rev. Mr. King.

The school will give a Christmas tree for the entertainment of the pupils.

Mr. J. D. Fenton was appointed trustee in the matter of the bankruptcy of R. Haas.

The rain of Saturday will in all probability give us a bayou full enough for boats.

Capt. M. W. Wilson and crew will leave some time this week for Jeffersonville, Ind., to bring his steamboat.

Messrs. J. E . Clayton of the law firm of Clayton and Hawthorne Attorneys of Ruston and Mr. Arnold Barksdale also of Ruston arrived in Farmerville Monday on business.

Mr. W. L. Trimble, of Crowley, La., arrived in Farmerville Saturday on a combination of business and pleasure. He is the guest of his brother, Mr. J. G. Trimble.

Every voter not only in Union Parish but in the State should vote and we hope Union parish will poll its full strength as an evidence of their appreciation of their citizenship.

Ballard’s Horehound Syrup.  Immediately relieves hoarse, croupy cough, oppressed rattling, rasping and difficult breathing. Henry C. Stearns, Druggist, Shullsburg, Wisconsin, writes, May 20, 1901: “I have been selling Ballard’s Horehound Syrup for two years, and have never had a preparation that has given better satisfaction. I notice that when I sell a bottle, they come back for more. I can honestly recommend it. 25c, 50c and$1.00 at R. HAAS’. 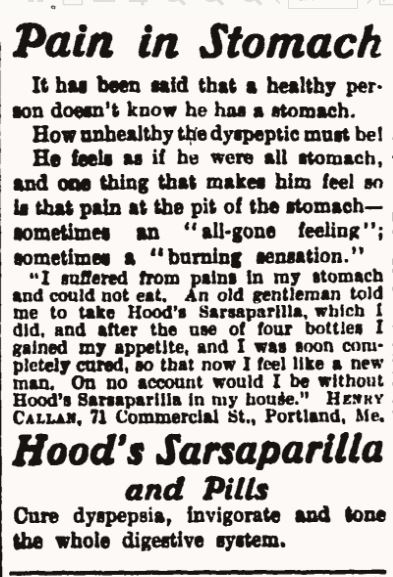 Our esteemed brother of the Farmerville Gazette asserts in positive terms that “from six hundred to a thousand dollars would establish a plant that would turn out 200 bricks per day at a cost of about $375 a thousand and they would all be easily salable at $675 a thousand.” Now, Bro. Munholland will do us a highly appreciable favor by divulging the secret process of brick making upon such a meager capital. Indeed every community in the State, his own, as well, contains a number of public spirited citizens hunting investments that will gladly seize such a golden opportunity with inordinate avidity. But seriously, brother, isn’t there something wrong about your calculations? We hope you don’t figure as recklessly on your  chances for election to the Senate.  – The Mandville Wave.

You are entirely too small in your estimate, Brother R_______. We have not the time to look at our files, but we must have said 12,000 brick per day. We have just returned from an interview with two practical and experienced brick makers, one of whom is making or has made over 400,000 brick for our new court house and he says the capacity of his machine is 2,000 brick per hour, but on account of scarcity of labor he seldom exceeded 14,000 per day. We are informed That the whole cost of his machine is less than $500.00. We are also informed by each of these gentlemen that an auger machine which costs $250.00 will turn out 12,000 brick per day at a cost of making, burning, etc., of $3.75 to $4.50 per M. If we make no worse mistake as to our chances for the Senate we will “Get there Eli,” and we will.

Favorite Family Remedy. Frequently accidents occur in the household, which cause burns, cuts, sprains and bruises; for use in such cases, Ballard’s Snow Liniment has for many years been the constant favorite family remedy.  25c, 50c, and $1.00 at R. Haas’

Following names will be certified to the Secretary of State by the chairman of the executive committee of Union Parish for places on the official ballot:

In ward 6 the race is to be run over between Messrs. Clark and Dawkins and in ward 5 between Messrs. Bearden and Pardue. These gentlemen will be voted for at the State primary on January 19, 1914.

HE FOUND A CURE. R. H. Foster, 318 S. 2d Street, Salt Lake City, writes: “I have been bothered with dyspepsia or indigestion for 21 years, have tried many doctors without relief, but I have found a cure in Herbine. I recommend it to all my friends, who are afflicted that way, and it is curing them, too. 50c at R. Haas’.

The Gazette acknowledge an invitation from Mr. and Mrs. A. J. Mashaw to attend the marriage of their daughter, Miss Eva, to Mr. Travis O. Grambling on Sunday evening December 20th, 1903, at 3:30 o’clock at their home in Ruston, La. We extend our best wishes to the contracting parties.

There’s a time for all things. The time to take Simmons’ Cough Syrup is when afflicted with Sore Throat, Hoarseness Coughs or Colds. It is guaranteed to cure you. Price 25 and 50 cents. Sold by J. D. Baughman and B. T. Hopkins.

The railroads get three times as much revenue from freight as from passenger receipts.

They never did fall; they never will fall. What? Cheathams Laxative Tablets – to cure a cold at once. Carry them in your vest pocket, always ready. Guaranteed. Price 25 cents. Sold by J. D. Baughman and B. T. Hopkins.

You’ve got the real thing when you get Hunt’s Lightning Oil for Burns, Bruses, Cuts and Sprains. The most penetrating and healing liniment known. Guaranteed. Price 25 and 50 cents. Sold by J. D. Baughman and B. T. Hopkins.

The Rev. Irl R. Hicks Almanac for 1904 in now ready. It will be mailed to any addr as for 30 cents. It is surprising how such an elegant, costly book can be sent prepaid so cheaply. No family or person is prepared to study the heavens, or the storms and weather in 1904, without this wonderful Hicks Almanac and Prof. Hicks splendid paper, Word and Works. both are sent for only one dollar a year. Word and Works is among the best American Magazines. Like the Hicks Almanac, it is too well known to need further commendation. Few men have labored more faithfully for the public good or found a warmer place in the hearts of the people. Send orders to Word and Works Publishing Co., 2201 Locust St., St. Louis, Mo.

Coughing Spell Caused Death. “Harry Duckwell, aged 25 years, choked to death early yesterday morning at his home, in the presence of his wife and child. He contracted a slight cold a few days ago and paid but little attention to it. Yesterday morning he was seized with a fit of coughing which continued for some time. His  wife sent for a physician but before he could arrive, another coughing spell came on and Duckwell died from suffocation. — St. Louis Globe-Democrat, Dec. 1, 1901.” Ballard’s Horehound Syrup would have saved him. 25c, 50c and $1.00 at R. HAAS’.

William Randolph Hearst has been made a member of the House Committee on Labor. Mr. Hearst declares that Democracy is Labor’s natural ally. The labor leaders are pleased that he is on the committee.

Hunt’s Cure is not a misnomer. It does cure Itch, Ringworm, Eczema, Tetter and all similar skin diseases. A wonderful remedy. Guaranteed. Price 25 and 50 cents. Sold by J. D. Baughman and B. T. Hopkins.

The Texas chapter of the Daughters of the Confederacy adopted a resolution of thanks to the President for endorsing the principle of secession in his recent action toward the Panama revolution.

Despite the accusations made against him in the Bristow report, it is now particularly certain that Perry S. Heath will remain secretary of the republican national committee.

****The picture below was not included in this addition of The Gazette.