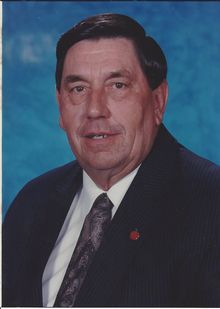 OLD UNION – Through half a century as an educator, Frank Futch experienced the twists and turns of the times as a teacher, coach and administrator in area schools. A community reception in honor of his 50th anniversary as an educator will be held from 2 to 4 p.m. May 15 in the Union School Cafetorium.

As a 1951 high school graduate of Spearsville, La., Futch has not wandered far from his roots. He served a year in Wisner, La.; 16 years in Spearsville as a coach, teacher and counselor and retired from the Louisiana educational system after 15 years in Union Parish, where he served as the parish supervisor in Farmerville, La.

At that point, he began his second academic career working in the Arkansas educational system as the principal at Huttig for five years. For the last 13 years, Futch has served as the K-12 principal in Union.

Although his last year in the classroom as a teacher was 1972, “I still miss the classroom,” Futch said. Unlike many coaches, he enjoyed preparing lessons. When he stepped up to administration in 1972, he began teaching a Sunday School class so that he would have a lesson to prepare for at least one class a week.

Futch enjoys the classroom as a teacher and as a student. He not only received a bachelor’s degree in education from Louisiana Tech University in Ruston in 1955, he also earned a master’s degree in 1963 qualified for his master’s plus 30 hours.

While Futch enjoys his hobby of fishing, “I will continue to work. My wife (Carolyn Futch) is still working at Medical Center of South Arkansas and she would not have it for me to be home and in bed while she is working. So every morning I am up and walking around the campus and doing paper work from 6:30 to 7:30 a.m. That is the best time of the day to get things done. We get up early so why not be working?” Futch said.

Since becoming a educator in the 1950’s, Futch has seen many changes in the schools. First and foremost have been the advances in technology. “I do not know how we did it without copiers and computers. Back then all we had were the hand-run ditto machines with the purple ink. If you got that on your hand or clothes,, you had to have it there for the next day or so.”

The other changes Futch noted was the declining lack of respect that students have. “When I started out, if the principal came in the room, you respected him, but nowadays … oh they still say ‘yes, sir’ and ‘no, ma’am,’ but it is harder to get it out of them.”

Of course, Futch taught during the integration of the schools. He experienced it in Spearsville in 1970, and watched the initial white flight as families pulled their children out of the public schools and put them in private schools.

“But most were back within five years,” Futch said, observing that it takes a lot of money to run a school.

The consolidation of Union with the El Dorado School District was the second consolidation for Futch, who worked in the Louisiana system during their consolidation. From that experience, Futch has a philosophical outlook on last year’s educational upheaval..

Futch also noted changes in educational emphasis from the three R’s: “Reading, writing and arithmetic,” to more emphasis on diversified technology and composition writing to prepare for the Benchmark tests.

“The interesting thing is that the kids who talk the best can’t write as well,” he noted.

He has seen schools go from seven class periods to the teacher preferred four block classes a day to eight periods and back to the seven periods. “The block classes made it easier for students to make up a failed class, but it was too long of a period of time to try to keep the students interested,” he said.

Looking back over his years in education, Futch had many good things to say about the schools where he served. He enjoyed the greater contact with the students at Huttig and has been awed by the Union PTO Halloween Festival fall fundraiser, which provided the school and teachers with $30,000 to $36,000 every year for additional supplies, equipment and activities..

The fourth major change Futch has seen in the classroom is the decline of men as teachers. “Certainly there is a need for men to teach as role models to the students. But it is difficult for families if the sole bread winner is a teacher. The family cannot make it on that salary,” Futch said.

Teaching is a God-given ability according to Futch, whose student teaching supervisor watched him for three days then turned the class over to Futch. “He said I got up there, draped over the lectern and he knew I could do it. I could take the pressure,” Futch recalled.

Besides teaching, Futch has also served as a sports umpire and referee. He was an umpire at Louisiana Tech for many years and a referee in high school basketball for 33 years. Although he is no longer a basketball referee, he continues to referee baseball. The highlight of his years as a referee came the year that George Steinbrenner came with the Yankee Baseball Team to Grambling, La., to play and Futch umpired the game. During their visit, Futch met with the players in the dressing room.

Futch and his wife have two daughters, Shari and Carla, three grandchildren and two step-grandchildren.

“I know why they call them grandchildren – because you can keep them all day long and then they go home,” he said with a twinkle in his eye.

The public is invited to attend the reception for Futch on May 15. 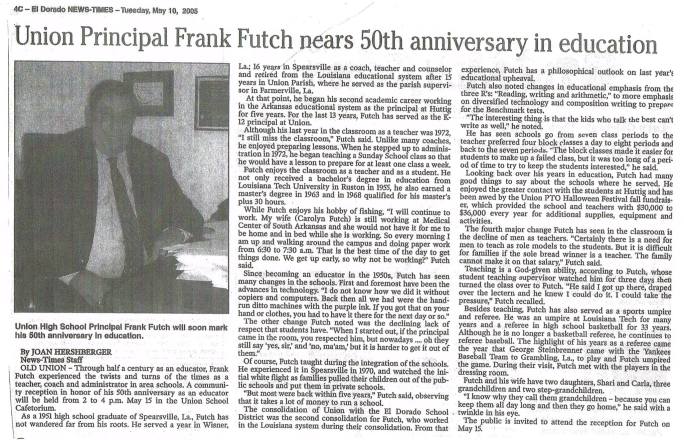