Interesting Program Starting at 9:00 O’Clock Has Been Arranged for Centennial of Farmerville and Union Parish; 10,000 Expected

With the several committees appointed by the president of the Union Parish Centennial Association working at full speed, with the people generally aroused to the importance of assuring success to the undertaking of making this the greatest celebration Union Parish has ever experienced, and with an interesting program for Centennial Day – lucky Friday, October 13th — already arranged, the big day looms up as an occasion which will give to Union Parish citizens and former citizens just what should be expected.

Dr. Claybrook Cottingham, president of Louisiana College, Pineville, has consented to be present on Centennial Day as the principal orator of the occasion. Dr. Cottingham, long an educational leader in Louisiana, bears the reputation of being a fine orator and a deep thinker. The committee, in securing his promise to be here on that occasion, labored hard to get a man whom it believes will do this subject justice, and after serious consideration Dr. Cottingham was selected to deliver the principal address of the celebration.

An invitation has been extended to the mayors of neighboring towns and cities to represent their communities in the celebration Mayor C. C. Goyne of Ruston, a native of Farmerville and who lived here until he was fourteen years old, has been selected by the committee to deliver the response to the address of welcome on behalf of the neighboring towns and cities whose mayors are expected to be present. Formal invitations also are being sent to several former distinguished citizens and old residents of the town and parish.

It is expected that a crowd of 10,000 people, the largest in the history of Union Parish, will assemble in Farmerville on the 13th. Looking forward to this, the committee to look after the barbecuing of the meats, the meat committee, the bread committee and other committees whose duty it is to see that food is plentiful for the occasion, are working hard at their several duties. The chairman of the meat committee reports that the response of the people has been quite satisfactory to date and that the several subcommittees in the wards of the parish are organizing and taking subscriptions for meats, such as hogs, sheep, goats, beeves, etc. The bread committee reports that bakeries operation in the parish have very generously agreed to donate bread. It is said, however, that cash is going to be needed also for much of these things, and all who can are expected to donate as liberally as is consistent to that end.

An interesting program for the day has been arranged by the program committee. Great care and consideration has been taken in the preparation of the program, particularly with reference to the history of Union Parish. It is the desire of the committee to make the program much longer and fuller than it will be and to include thereon many more talented people in the parish, but the matter of  time was duly considered and in order to successfully carry it out without tiring out the great audience, the chairman said it has been prepared so as to require not more than two and a half hours.

Following is the program:

Parade from Court House to Farmerville High school campus at 9:30 A. M. The parade will include civic clubs, American Legion, Boy Scouts of America, the band, citizens, and other organizations.

Assembly in the Community Auditorium at 10:00 A. M.

Song, “America.” by the audience, conducted by Doyle Smith.

Address of Welcome, by the president.

Music by the band. 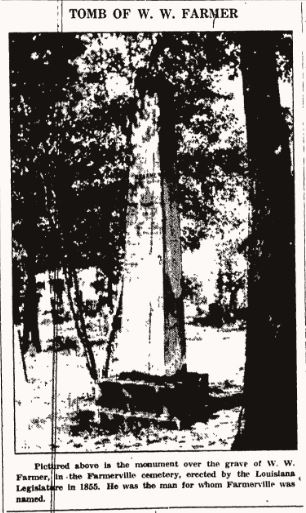