The citizen who is over 21 and under 60 years of age must pay his poll tax before December 31st, 1903, or he will be barred from voting in any election held in 1904 or 1905. The law requires the payment of your poll tax before December 31st of each year, for two years, previous to the time you offer to vote. If you neglect this privilege this year, it will be the year 1906 before you can possibly regain your right of suffrage. Any one who has become 21 since Dec. 31st, 1902 can by paying his poll tax for 1903 and registering at the primaries Jan. 19th 1904.

All kinds of Xmas goods at F. E. Mayo’s.

Only seven more days in which to pay your poll tax, or lose your right to vote.

Go to F. E. Mayo’s for your Christmas goods.

Misses Bertha and Birdie Cook and Miss Annie Pleasant are at home to spend the holidays.

For fine candies and fruits of all kinds, call on F. E. Mayo.

Mr. D. E. Laupheimer left Sunday on a visit to Monroe. We are glad to know that his broken leg is sufficiently improved to admit of the trip.

Mr. T. W. Clark states that they had an enthusiastic Jastremski meeting in Bernice on Tuesday 15th. They may enthuse but Blanchard is the winner by odds.

Fireworks are plentiful, and the small boy is happy.

Coughing Spell Caused Death. “Harry Duckwell, aged 25 years, choked to death early yesterday morning at his home, in the presence of his wife and child. He contracted a slight cold a few days ago and paid but little attention to it. Yesterday morning he was seized with a fit of coughing which continued for some time. His  wife sent for a physician but before he could arrive, another coughing spell came on and Duckwell died from suffocation. — St. Louis Globe-Democrat, Dec. 1, 1901.” Ballard’s Horehound Syrup would have saved him. 25c, 50c and $1.00 at R. HAAS’.

Gen. Leon Jastremski, candidate for governor, Ex-Senator F. F. Jonas, candidate for United States senate, and Judge Allen Barksdale, candidate for lieutenant-governor, will address the voters of Union Parish at Farmerville on January 4th. Everybody is invited to attend.

Ballard’s Horehound Syrup.  Immediately relieves hoarse, croupy cough, oppressed rattling, rasping and difficult breathing. Henry C. Stearns, Druggist, Shullsburg, Wisconsin, writes, May 20, 1901: “I have been selling Ballard’s Horehound Syrup for two years, and have never had a preparation that has given better satisfaction. I notice that when I sell a bottle, they come back for more. I can honestly recommend it. 25c, 50c and$1.00 at R. HAAS’.

Since our last issue, The Gazette has learned that the safe in the store house of Mr. J. R. Fuller of Shiloh was blown open Monday night, the 14th instant, but on account of the burglars being frightened away they only secured a little more that one dollar. There was more money in the safe, but they failed to get it.

The Gazette failed last week to note the death of Mr. P. H. Ford, of Ouachita, who has been a resident and a merchant there for many years. Mr. Ford was an honest, upright good man and citizen and had many friends. He leaves a wife to mourn his demise. The Gazette and community regret the death of any good citizen; hence the death of Mr. Ford is sorely regretted.

Cards are out announcing the marriage of Mr. J. C. Maroney to Miss Mollie Bird, which event will take place on December 30, at the residence of the bride’s father, near Oakland. Mr. Maroney has been in the employ of Mr. J. D. Baughman for the past year and has shown business ability. The bride is the lovely daughter of Mr. B . O. Bird, who will do her part toward making their married life happy. We offer, in advance, our congratulations.

License has been issued by the clerk of the court authorizing the celebration of the marriage of Miss Carrie Heard, the charming daughter of Mr. and Mrs. T. A. Heard, to Mr. J. D. Green, all of Bernice, La. The marriage ceremony will take place to-day, but at what hour or whether at the home of the brides parents or at church The Gazette is not informed. The Gazette extends congratulations to the contracting parties and wishes them a marital future of pure ecstatic bliss and a never clouded but an eternal roseate felicity. 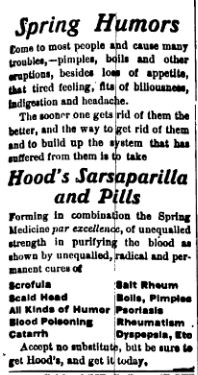 The re-issue of the Pope bicycle daily-leaf calendar may be considered the opening gun proclaiming the natural and healthful return of bicycling. Col. Albert A. Pope, the founder of our bicycle industries and the pioneer in the Good Roads Movement, is again at the head of the bicycle industry. Upon the 366 calendar leaves are freshly written lines, from the pens of our greatest college presidents, doctors, clergymen, statesmen, and other eminent men and women, all of them enthusiastically supporting bicycling. Half of each leaf is blank for memoranda. This calendar is free at the Pope Manufacturing Company’s stores, or any of our readers can obtain it by sending five 2-cent stamps to the Pope Manufacturing Co., Hartford, Conn., or 143 Sigel Street, Chicago, Ill.

HE FOUND A CURE. R. H. Foster, 318 S. 2d Street, Salt Lake City, writes: “I have been bothered with dyspepsia or indigestion for 21 years, have tried many doctors without relief, but I have found a cure in Herbine. I recommend it to all my friends, who are afflicted that way, and it is curing them, too. 50c at R. Haas’.

Six wagons, loaded with material for the bridge across Loutre, passed through Farmerville last Wednesday morning. Before many days the people travelling between this place and Marion will have a bridge they can cross without fear of collapse and one that will last almost indefinitely.

Some of the rough brick to be used in the court house appear and by some are said to be of a very inferior nature. No inferior material should go into such an edifice because with good material and well constructed it should and will stand for more than two hundred years.

Oft in the stilly night a racking cough doth rob us of that sweet sleep which nature seeks to give. Simmons’ Cough Syrup is an infallible cure; undoubted sleep and pleasant dreams it doth assure. Guaranteed. Price 25 and 50 cents. Sold by J. D. Baughman and B. T. Hopkins.

Mrs. H. E. Archer died at her home late Monday afternoon of pneumonia. She leaves a husband and four children to mourn here death. Her remains were interred in the Taylor grave yard Tuesday afternoon. The Gazette tenders its sympathy to the bereaved family.

The Farmerville High school has arranged for a Xmas tree on the evening of the 24th. A committee of little girls have raised a fund to be used in buying presents to be put on the tree for the needy children. A  glorious time is promised the young folks.

There is a time for all things. The time to take Simmons’ Cough Syrup is when afflicted with Sore Throat, Hoarseness, Coughs or Colds. It is guaranteed to cure you. Price 25 and 50 cents. Sold by J. D. Baughman and B. T. Hopkins.

On account of it being so near Christmas the district court was postponed until the fourth Monday which is Dec. 28th. this will give but one week in which to transact the business for December, but it will be ample as the docket is light.

Hunt’s Cure is not a misnomer. It does cure Itch, Ringworm, Eczema, Tetter and all similar skin diseases. A wonderful remedy. Guaranteed. Price 25 and 50 cents. Sold by J. D. Baughman and B. T. Hopkins.

They never did fall; they never will fall. What? Cheathams Laxative Tablets – to cure a cold at once. Carry them in your vest pocket, always ready. Guaranteed. Price 25 cents. Sold by J. D. Baughman and B. T. Hopkins.

It is reported that the foreman of the Dubach Lumber Co., a Mr. Barr, was badly cut last week in a difficulty with a boy by the name of Williams. Big men should not jump on small ones. It is dangerous.

You’ve got the real thing when you get Hunt’s Lightning Oil for Burns, Bruses, Cuts and Sprains. The most penetrating and healing liniment known. Guaranteed. Price 25 and 50 cents. Sold by J. D. Baughman and B. T. Hopkins.

We understand that Mr. R. J. Rasbury and family will move to Ruston on the 1st of January, 1904, at which place they will make their home. We hat to see Mr. Rasbury and his excellent family leave.

A negro in Texas has been sentenced to a thousand years imprisonment. He will hardly serve his entire term.

It is stated that two per cent of habitual drinkers become habitual drunkards.

The boll weevil has not yet been made a party issue.

Favorite Family Remedy. Frequently accidents occur in the household, which cause burns, cuts, sprains and bruises; for use in such cases, Ballard’s Snow Liniment has for many years been the constant favorite family remedy.  25c, 50c, and $1.00 at R. Haas’ 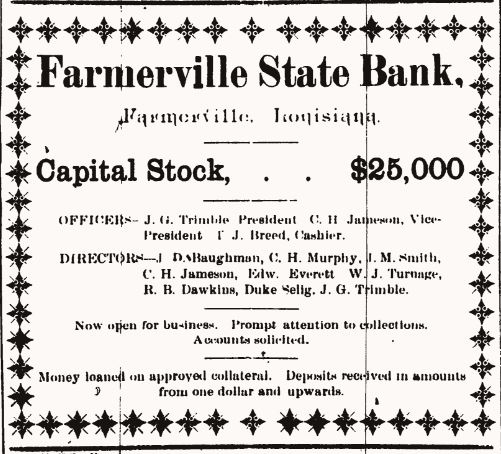